I recently received an inquiry from our own PaduchaMichael.  He asked me if the factory was planning anything “special” to commemorate the 50th anniversary of NAA.  His inquiry reminded me that the early history of NAA is somewhat vague (to me) and I determined that I would attempt to bring some clarity.

When I several years ago abandoned my “official” office in PA (an executive office suite – a precursor to WeWork – where no one came to visit me ever) and started to conduct all of my business from my home, I purged a LOT of stuff that I had accumulated over the previous 25-or-so years.  I’ll admit there have been times I wish I hadn’t been so efficient/draconian then, as I’ve found too often I’ve looked for files and other things that had been relegated to the dumpster.  Fortunately, there were some gems that I kept for posterity, a couple of which I’m happy to share.
The oldest document I could find is an article written by Clair Rees and published in the April 1973 edition of Shooting Industry which describes the formation (in the Fall of 1971) of a new firearms manufacturer whose name many of you will likely recognize: Rocky Mountain Arms Corp.  You’ll be interested to read of the variety of different products which were part of the RMAC portfolio, to include a .22 Short caliber mini-revolver.
While the article identifies several people involved in this start-up business, the only one with whom I’m familiar is Dick Casull, “the greatest gunsmith-inventor since JohnMoses Browning”, according to some.  I had the occasion to meet Dick on several occasions, and to spend time with him and his wife, Jerri, at their home in the Star Valley of WY.  Of the several products which were part of the RMAC portfolio, the one that gets “first billing” in the article is a large-frame single-action revolver chambered in the eponymous .454 Casull, which ultimately became the foundation of Freedom Arms product line (more on this later).  The article note that Casull’s .22 Short mini-revolver had an MSRP of $69.50.

I will share additional materials in subsequent Soapboxes.  In the meantime, I would be happy for any in the audience to share with me any additional information about NAA’s early years that can be documented.  More to follow. 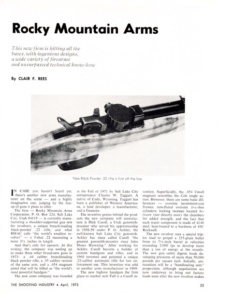 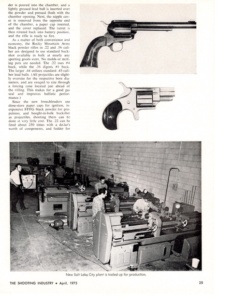 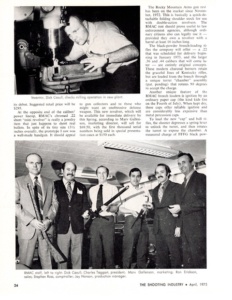